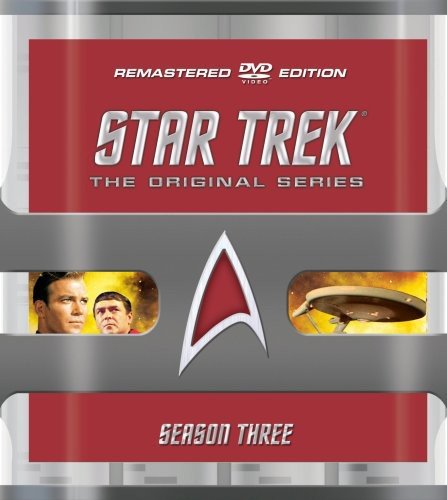 Space. The Final Frontier. The U.S.S. Enterprise embarks on a five year mission to explore the galaxy. The Enterprise is under the command of Captain James T. Kirk. The First Officer is Mr. Spock, from the planet Vulcan. The Chief Medical Officer is Dr. Leonard 'Bones' McCoy. With a determined crew, the Enterprise encounters Klingons, Romulans, time paradoxes, tribbles and genetic supermen lead by Khan Noonian Singh. Their mission is to explore strange new worlds, to seek new life and new civilizations, to boldly go where no man has gone before.

Saved from the brink of cancellation by its loyal fanbase, Star Trek's third and final season rewarded them with a number of memorable episodes. Tight budgets and slipping creative control, however, made it the series' most uneven season, though it did have some of the coolest episode titles ("For the World Is Hollow and I Have Touched the Sky," "Is There in Truth No Beauty," "Let That Be Your Last Battlefield"). Some of the best moments involved a gunfight at the OK Corral ("Spectre of the Gun"), a knock-down drag-out sword battle with the Klingons aboard the Enterprise ("Day of the Dove"), the ship getting caught in an ever-tightening spacial net ("The Tholian Web"), TV's first interracial kiss ("Plato's Stepchildren," and it should be easy to guess who participated), Sulu taking command ("The Savage Curtain"), and Kirk's switching bodies with an ex-love interest ("Turnabout Intruder").

The 2008 DVD set benefits from the same remastering given to the other two seasons, though only the first was released in high definition (the now-defunct HD DVD format). Still, the episodes are substantially cleaned up to the point where they look quite good, rather than jarringly fuzzy to the modern viewer. And there are some new visual effects that are well-done, and obtrusive only to the strictest fans. Compare, for example, the dramatic close-up of the green-glowing U.S.S. Defiant in "The Tholian Web" with the original effect, which had the ship floating in a green haze. New bonus features are 11 more minutes of rare footage from extra Billy Blackburn; "Collectible Trek," a 14-minute discussion of rare Trek items, filmed in 2004 with the rest of the bonus content but not included on the previous DVD set; and the newly filmed "Captain's Log: Bob Justman," an affectionate nine-minute tribute to the series producer. Otherwise, the set retains almost all the special features from the 2004 set, including the features on Walter Koenig, George Takei, and James Doohan (who died the following year), plus the two versions of the series pilot, "The Cage," a restored color version and the original, never-aired version that alternates between color and black and white. Starring Jeffery Hunter as Captain Pike, Leonard Nimoy as a relatively emotional Spock, and Majel Barrett (the future Nurse Chapel and Mrs. Gene Roddenberry) as a frosty Number One, this pilot was rejected, but a second was commissioned, "Where No Man Has Gone Before," now considered the "official" beginning of the series. But "The Cage" is very recognizably "i"Star Trek with its far-out concepts (telepathic aliens collecting species samples), sexy humanoid women, character development, and of course cheesy costumes and special effects. Footage was later reused in the season 1 two-parter, "The Menagerie." "i"--David Horiuchi

Welcome to Humanities Commons, the network for people working in the humanities. Discover the latest open-access scholarship and teaching materials, make interdisciplinary connections, build a WordPress Web site, and increase the impact of your work by sharing it in the repository.

Using the Commons for Canceled or Virtual Events

For those who have had to cancel events or shift to virtual meetings in response to COVID-19, this post provides information about ways Humanities Commons could be a resource.

Are you being asked to move your course online in response to COVID-19? The MLA has gathered some resources on this Commons site.

Looking to update your presence on the Commons?

Do you want some ideas for how to refresh your online presence? You can use these TOUHIA 2.54mm Pitch 4-Pin PCB Mount Screw Terminal Block Connect as a guide!

The Educator’s Guide to Humanities Commons

Recently on the Commons

We're committed to remaining free and open to all. Your donation will help support the network as we expand.

Humanities Commons is proud to be a partner in the Metascience 2021 Conference, presented by the Center for Open Science. The conference will be online September 16-18 and 23-25. Registration is open now!

Go to CORE to upload and archive work in our open-access repository.