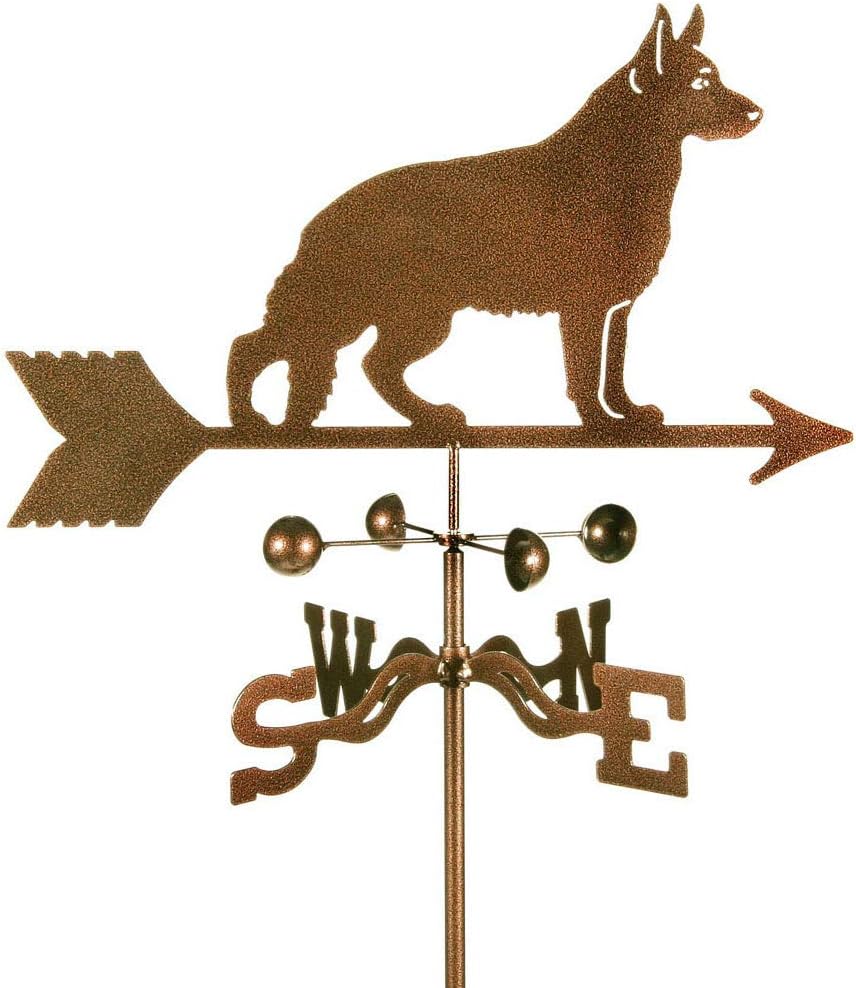 Each intricate laser cut top is made from 14-gauge steel (which is thicker and stronger than 16-gauge). Additionally, each vane has a 3-step coating process for maximum durability against the elements. First, a zinc chrome plating is applied to the base metal for better adhesion, durability, and to help prevent rust. Second, each weathervane is baked in a beautiful powder-coated aged copper finish. Third, a clear powder coat is applied to protect against UV rays and provide a durable, scratch-resistant finish. Complete set includes a laser cut top, wind cups that have sealed ball bearings to rotate smoothly in any breeze, a North-South-East-West directional indicating the direction the wind is coming from, and your choice of mounting. Each weathervane has a 21â arrow length and 6" to 11" in height, depending on the design. Choose between roof mount, Cupola mount, deck mount, post mount, and garden stake. The roof mount includes a two-sided mounting plate and a 15" pole, which is designed to fit a standard 4-12 pitch roof, but is adjustable to fit most roofs. The Cupola bracket includes a four-sided mounting plate and 15'' rod (not shown) and is designed to fit gazebos, dome, or any 4 or 8-sided roof or structure. Adjustable to fit most roof bars. Deck Bracket includes 3" x 3'' mounting plate and 15'' bar (not pictured) and is designed to mount on top of any flat or horizontal surface. Mounting post includes 3" x 3'' mounting plate and 15'' bar (not pictured) and is designed to mount to the side of a fence post or any vertical surface. The garden stake includes a 60'' tall stabilizing stake (2 pieces) for easy mounting.

Black For iPhone 8 4.7 Inch LCD Screen Replacement Full Digitize: I know this if off topic but I'm looking into starting my own blog and was wondering what all is needed t...